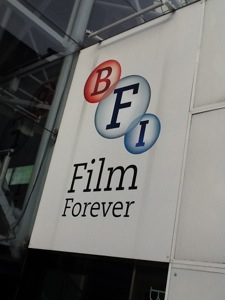 On the 22nd and 23rd Jan I attended a conference at the BFI on community filmmaking, part of a research study aiming to contribute to the debate around community filmmaking and cultural diversity by exploring how cultural diversity intersects with community filmmaking and the results of this intersection in terms of representations and identities as well as practices and innovation. The research is being undertaken by Brunel University, Kings College London and the University of London. It has been funded by the Arts & Humanities Research Council. The website for the project is here.

It was intense few days, and for me, interesting, looking at filmmaking practice from a more academic perspective. There were a lot of great speakers and debates and I think the best way to represent them here is for me to note some of the stand out ones that relate to Re-Dock and our work practice.

Taking time out to listen and think about community filmmaking practice in relation to filmmaking and the standard norms and expectations that this brings, was a really useful thing to do. In general, I do what I do, because its enjoyable, fun, creative, collaborative and facilitates learning and sharing. The process of community filmmaking for me is about finding an approach that works in relation to the subject matter. Collaborating on a variety of community stories, facilitates a certain amount of experimentation, which may or may not work, but has the chance to touch upon a spark of something unique, and there’s often a sense of freedom and energy that comes with that. This often conflicts with the standard filmmaking practices, but I don’t think these processes should be any less celebrated.

This thought process featured in many of the presentations, such as from Daniel Ashton who focused on diverse ways of storytelling, using the BBC’s ‘Britain in a Day‘ which offered possibilities of sharing, but not in terms of production expectation, using online tutorials to encourage people to follow established practices, highlighting a tension between the filmmakers and the editor. Where as, the ability the peruse different aesthetics should be celebrated.

David Buckingham, (Loughborough University) put forward an argument that questioned the media revolution, saying that actually what was happening was rather more mundane, asking questions such as who is participating? Is it just the usual suspects? And are there any digital divides? He suggested that everyday users tend to be ignored and that we should defend banality.

Eileen Leahy (Trinity College,Dublin)
Looked at positives and negatives of community filmmaking and how although having positive aims, often causes of inequality are not addressed and social inclusion terms are ill defined and that films are often made looking through a middle class lense. However, there are some benefits, such as allowing commutes to reclaim physical spaces, bringing different people and communities together, and empowering people through sharing stories and looking at the world in a different way.

Elieen also raised Questions of authorship – films are made in complex ways ad who owns it when it is finished? The community rarely own the film or have a say in how it’s made. It’s the issue of power for community groups to own the films they produce, even if they are not bothered particularly about the end result.

Thinking back, I’ve seen community film projects that have (with all good intentions) been developed by committee, with the end result being worthy and failing to do justice to the subject matter. It’s always a balance, but if you think about something too much, you can always think of a reason not to do it, and in this line of work, there’s a lot to be said for spontaneity and surprise and we shouldn’t loose sight of that. I think the lessons to be learnt here are that many of these arguments are just part of the process of filmmaking and that our approach at Re-Dock should always to keep respect at the forefront of our work.