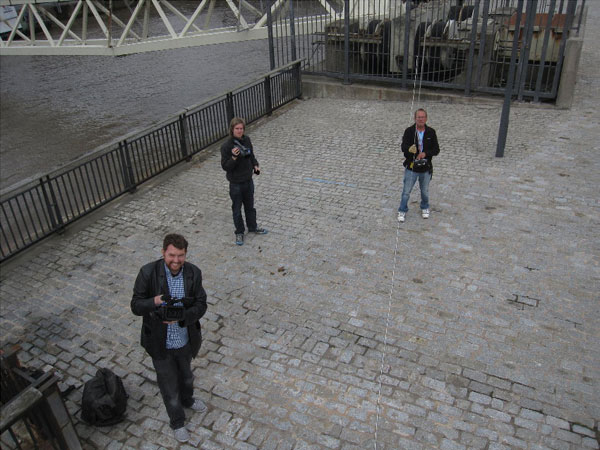 Its been over a year since we started work on the Mapping Memory project, investigating peoples’ experiences of Liverpool in the 1950’s 60’s and 70’s. We were given a new perspective on our work by John Quirk, a former electrical engineer and avid kite photographer.

We spoke to John about his experiences working in Liverpool during the last days of the working central waterfront, plotting places he remembered on a map, before heading out on to explore on foot. John took us to the Pier Head, where he remembered buying the off steak pie from a kiosk before catching the bus home after a night out in the 60s. The Pier Head used to be Liverpool’s transport hub, with buses, trams (until 1957), the overhead railway (until 1956), and of course, the landing stage for the ferry. It has changed a lot over the decades, with its latest incarnation incorporating a magnificent extension to the Leeds – Liverpool canal.

As a film-maker I am used to framing the action, having thought about all possible perspectives, but here John showed me the city in a way that I’d never seen before. Using a home-made bracket he attached a digital camera to the kite line, and sent it up far into the sky to take picture using a radio controlled transmitter. The images of the Pier Head from above were revealing – the edge where the Mersey meets the land, the sense of boundaries and urban landscaping, and the buildings in conversation with each other, and even ourselves, filming John as he let the kite climb higher, and we became as small as ants.

The really amazing aspect though, the things that really blew me away, were the simplicity of the technique, the freedom and political nature of being able to get a perspective of public space, and the craft and skill that John put into making the bracket and controlling the kite. Having spent so long looking at maps of Liverpool, John showed us a new way to navigate the city, creating a view not unlike a map.

When I say the technique was simple, I mean in principle. In reality, John’s experience and skill in creating things from scratch, combined with his understanding of electronics and his love of kite and photography to make a really fascinating and powerful device. It immediatley made me think of some of our more hands-on electronics friends (Ross Dalziel, Dave Lynch, and the DoES lads John McKerril and Adrian McEwen) who combine digital skills with physical computing to create something new and creative. It is a very powerful thing to have an idea for a tool and be able to make it, but something that came naturally to John, and indeed many of the people we have met on this project. Creating something from scratch on a lathe, or seeing how science, manufacturing and artistry combine to create a ship’s compass – this exposure to process and tools – is key in supporting the creative mind in developing and achieving its crazy ideas.