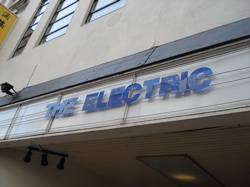 Last week I went to the Electric Cinema in

Birmingham to attend a seminar on the Digital Funding Partnership – a scheme to allow independent  cinemas to  get on board the ‘digital revolution’. It seemed to me to be both a revolution and an apocalypse, depending if your cinema survived. Either way, it really hit home that in 3-5 yrs the landscape of cinema would be completely different. There would be no new 35mm films made for distribution. The ‘old’ model of cinema is on its way out.

I was there due to my involvement with the local Plaza Cinema but I also used it as a chance to research the Electric Cinema itself as part of our NAN Go And See bursary to explore different models of cinema. The Electric Cinema is in someways the perfect example of a small commercial cinema, that combines traditional aesthetics and values with new technology.

The UK’s ‘oldest working cinema’, the building was bought in 2004 by Tom Lawes,  and renovated it to include a small screen and a studio for his media production work.

Since then , a new screen has been added, as well as  digital projectors and 3D alongside the existing 35mm. It has, in a sense, the best of both worlds that  the Odean  (now owned by the american UCI chain) can’t provide – the traditional british charm of cinema, but with the facility to show the latest films, and build a personal relationship wth the audience.

Tom, who runs the Electric Cinema, is by nature a cinephile, interested in not on film, but the changing landscape of cinema exhibition. He is producing a film on the history of the building, and the people who worked in it. See the trailer below.