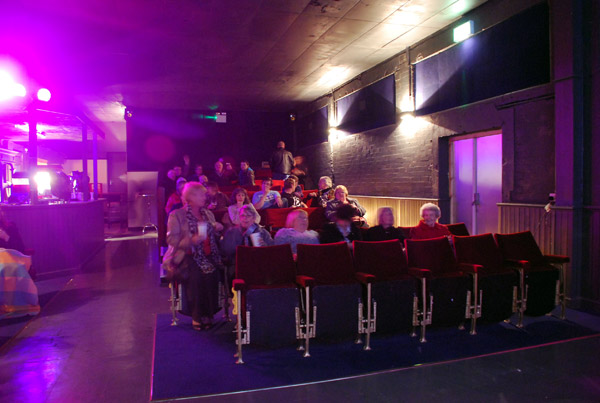 We recently created A Small Cinema in Moston. Below is a potted history of the project.

(you can check out the project blog here.)

The Small Cinema project has been developing over 4 years now, with various iterations in different places, all exploring the idea of how might cinema spaces be created in relation to communities. Manifestations of the idea have, until now, been temporary – one-off events and ‘pop-up’ screening spaces – and so never fully tested the central conceit of the project.

The Moston Small Cinema is the most ambitious expression yet, working with volunteers to create a permanent screening space in the heart of a community. The  result: a 70 seater cinema, replete with authentic cinema seats, built with donated materials, housed in a former miner’s wash house. The project combined community engagement, research and film-making to inform an ambitious plan to develop a cinema facility and hold a 10 day festival of screenings and workshops.

My feeling was that if we were to create another Small Cinema project, then I wanted to explore creating a semi-permanent facility to leave as a legacy for a community. This was partly informed by my knowledge that I would be able to get hold of actual cinema seats being made available by the Plaza, Liverpool. The seats felt to me like the corner piece of a jigsaw. The other key parts would be space, community and support. 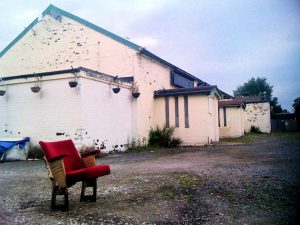 We were approached by Buddleia (arts agency working in North Manchester) to develop a Small Cinema project in North Manchester, with support from Manchester City Council. The initial reccies around Cheetham Hill Rd proved spaces was pretty hard to come by, and so we turned to Moston, where-upon we found the Miners Community Arts and Music Centre.

Run by Lou Beckett and his father Joe, along with various volunteers, The Miners is a formers wash-house and social club that had been neglected for many years until Lou had the idea to develop it as a space for artists. Over 2 years, aided by volunteers and donations, they have slowly made parts of the complex functional again, opening up a cafe, a gallery and a function room. When we approached them about the cinema project, they were really keen to see it happen there.

We began as usual by collecting memories of cinema from people in the area. The Miners became central to this activity, hosting a pinboard where people could write down their experiences. These were collected, and then later shared through tweets, blog posts, and even lasercutting lolly sticks!

I attended numerous coffee mornings, residents meetings, a knitting group and events and meetings with FC United, a fan-owned football club who are soon to build their new stadium a stones-throw from the miners. From these discussion we began to learn about the area and what cinema and community meant to people. We met some great characters – Brian Lever showed us round the former Adelphi Cinema (now a DIY store) and also shared his memorabilia with us; the NEPHRA knit and natter group became regular collaborators in developing experiments around knitting and the moving image. FC Utd also became a key partner, passing news through their network of fans, and also letting us make a documentary on the club. We also spoke to businesses on Moston Lane, in the heart of the African Community, about what cinema meant to them, and learnt that the VCD is alive and well in Nollywood!

All of these discussions helped us to understand the landscape in North Manchester, but also to spark the discussion across the community about our ambitious plan to develop a screening space. Would word of mouth translate into hands on deck? 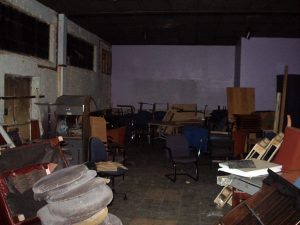 The space we chose to host the cinema presented a huge challenge – no electric, fire-damage, peeling walls, and full of rubbish. It did, however, have potential – a bar area, its own access and egress, space for toilets and plenty of space for seating and a screen. Developing this space would effectively add another wing to the Miners Community facility, rather than just fitting in (or taking over) an already functional space. 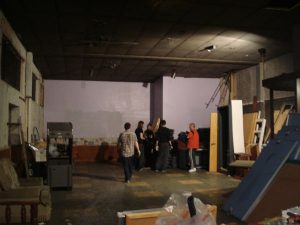 We began by clearing out the space, and a call out for volunteers saw a small group pitch in over a weekend, filling a skip  and moving stacks of furniture and carpet tiles to new homes. It was a big job, but once the space was emptied the potential was obvious – we had a blank canvas for our ideas.

Through consultation with volunteers, designers, technicians and architects, and Lou & Joe, we developed an ambitious design for a raked seating area as the core of the cinema space. The plan was good was a good plan, but would need a lot of hands-on support…

After a month of getting the word out, Building Week started brilliantly, with over a dozen volunteers and tradesmen lending their time and skills that first weekend. Local businesses also supported the project, supplying paint and timber. The energy was amazing: scaffold was assembled, walls were painted, cinema seats cleaned, plasterboard patched and many brooms swept the floor. Seeing the transformation happening before our eyes gave everyone a huge buzz. 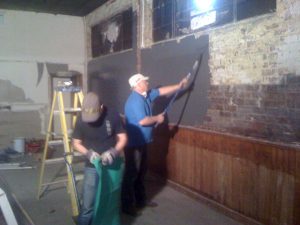 As the week progressed, we began to tackle trickier elements of the build – painting the ceiling, repairing the back wall, and of course, building the seating rake. This was a massive job (and a skilled one), and after the initial burst of progress, the reality of constructing a space really dawned on me. After a week it was clear that Rome was not going to be built in a day. Luckily I wasn’t on my own, and more skilled volunteers than myself got stuck in for the long haul…

As the building progressed, so the idea and the people began to take shape. A hardcore of volunteers formed and different people dropped in along the way, helping out for a day or two, or more. We were all getting more out of this than just creating a cinema. We were getting to know each other, learning skills from each other, debating important things about film and music and football. Visitors would come in too – the local community offices would drop by to see how its going, residents would pop their heads in and all would be so impressed with the work and the vision. More businesses donated materials, including roller shutters, more paint, and even a slush puppy machine! 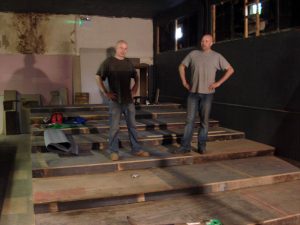 But with job done,  each milestone achieved, the end bizarrely seemed further and further away. Why was this? With each day, the volunteers invested more and more time and creativity into the cinema, the bar got raised. Each detail had to be right –  it wasn’t enough to build a rake, it had to be carpeted as well, and the carpet would need trims, and the steps needed lights, and the seats need another coat of gold paint, and the corridor needs plastering, and so on. The level of ambition rose, the task grew, and building continued right up until the opening day of the festival. 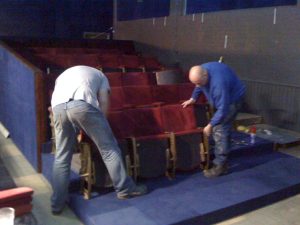 News of the cinema building and the upcoming festival began to spread around the community, but we were keen to get the word out further. A couple of carefully aimed press releases did the trick and we made features in the Manchester Evening News, Oldham Chronicle and even a couple of stints on BBC Radio Manchester and North Manchester FM. 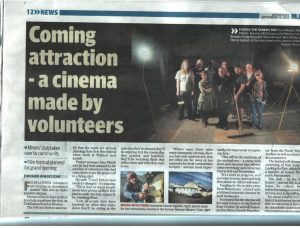 The opening day even saw Granada Reports pop down to have a look at this strange ‘hand-built’ cinema.The press had a positive effect, rustling up a few more helping hands, as well as raising the profile of the project and awareness about the festival.

Whilst the building was taking place, we were also busy planning what we were going to show. The aim was to make sure there was something for everyone, whilst using it as an opportunity to try a few different things. Films were suggested by volunteers, residents, community groups and local organisations. The final programme included archive films of cinema in Manchester, a film about the mining industry, children’s matinees, new animations, a 70’s zombie film part-shot in Manchester, African cinema, classics like Gone With The Wind, and a nod to the FC Utd supporters, Ken Loach’s Looking For Eric. 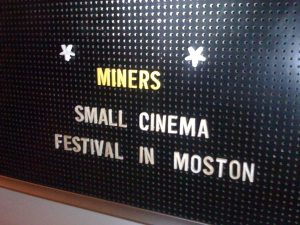 We also had several creative workshops from, including 16mm animation from the Unravel guys, digital stop motion with animator Daniella Orisini, retro gaming with the Megabyte Crew, and an SFX Masterclass with Davy Jones. 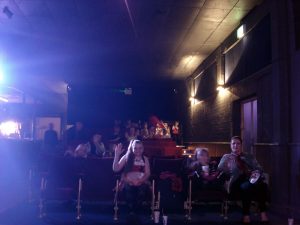 All of these events tested potential uses of the space and reached out to potential audiences. Some events were full, and others nearly empty, but it was a busy week that launched the cinema to over 350 people, many of who had never stepped inside the Miners before.

The ‘legacy’ of the project is easy to account for on paper – a redeveloped space with a versatile digital film screening facility (bluray, digital and 5.1 surround), and a plush seating rake – an asset for the community. There is also the shared experience of the volunteers who took part in building the cinema, and the participants who contributed to the films.

The legacy though isn’t something that is fixed, it is something taking shape, that still needs guiding. Already we have held a few community events and film screenings in the cinema; there are enquiries from local organisations wanting to hire the space – proof that it is a much needed community facility. These requests, as well as the eagerness of the volunteers and the Miners to put regular events on, all need to find a way to be managed between people, so that the cinema is run sustainably, benefitting everyone. The task now is to develop that framework for a volunteer committee to manage events at the cinema, making sure that it can keep developing as a facility and keep sharing film with the community. As we have found out, managing a space is not easy, and developing audiences is a bit of a black art, requiring persistence and creativity. It wont happen overnight, but if everyone involved can support each other, then it will eventually happen.

In addition, the story of the cinema is already inspiring others. We have had visits from architecture students, as well as community groups from the other side of manchester, and comments via email and twitter from America even. Just as the Small Cinema project was inspired by seeing examples of screening spaces in Berlin, followed by dialogues with groups such as the Star and Shadow in Newcastle, this project has the potential to inspire an ecology of cinemas. The important thing now is to carefully sustain some momentum, set a framework for us as a group, and let the Moston Cinema take its own shape.