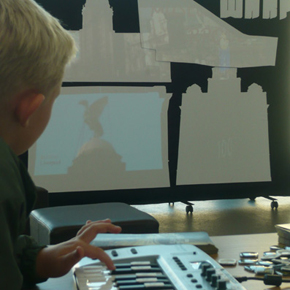 The Pier Head Time Warp was an  interactive video event by Re-Dock at the Museum of Liverpool on Saturday the 15th Oct.

We were asked by the Museum of Liverpool to run an activity that would get people working creatively with archive video, so we invented a time machine.

This time machine was in reality, a musical keyboard that through the magic of Isadora, could be used to trigger video, sound effects and audio memories relating to the Liverpool Pier Head.

Although we were aiming to appeal to people from 8 to 80, for the most part the people that really got into it were either 8 or 80.

I exaggerate here, but it did spark the interest of both young people and older adults at the same time, which is rare.

To older people we could ask,

As the Pier Head is such a well loved and iconic space we weren’t short of takers on this.

To young people we could say,

“Would you like a go of our time traveling keyboard?”

Obviously they said “Yes.”, so we then showed them which keys would trigger videos to play in which building, and which would overlay those videos with audio memories and sound effects.

It seems to be a bit of an inter generational few weeks for Re-Dock, as John  has been supporting young people in West Kirkby conduct video interviews with older members of their community as part of the ‘Honouring Our Elders’ project.

As I’m writing this I have just had an idea for a project that would synthesize the approaches of in depth interviews and VJ-ing, ‘Re-mixing Our Elders’

An Example of videos made using the ‘Pier Head Time Warp’ keyboard.