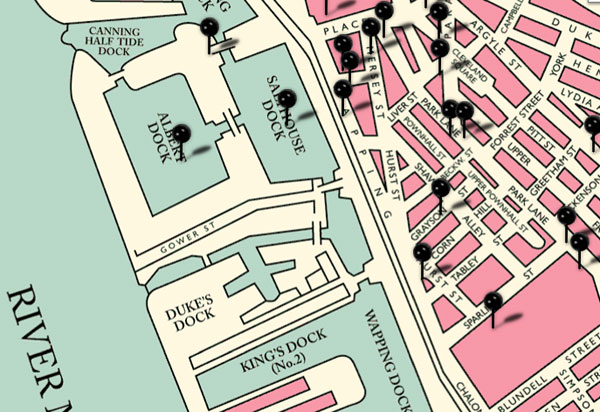 2011 has been an incredibly busy year for Re-Dock, and we’re only just getting the chance to take stock and reflect on the work we’ve developed. One of the biggest projects we’ve ever undertaken was completed in September this year – the Mapping Memory project. I’m going to briefly talk about the two major outputs – the 1950’s Google Map, and the 40 minute documentary.

The project was a partnership between Liverpool University History Department, Merseyside Maritime Museum, and ourselves. We worked with Graeme Milne and Laura Balderstone to develop a series of filmed consultations and mapping exercises, exploring various peoples’ memories of the Liverpool’s central waterfront and the city centre in the post war period.

One of the key outputs of the project is a google map interface, skinned with a map of 1950s Liverpool, and populated with various video interviews, archive film and photos, as well as text and objects.

The consultations, spread over a year, provided a huge amount of information including buildings and businesses that no longer exist, and some fantastic personal experiences of the area in the 50’s 60’s and 70’s. This then informed further research for archive images and film, as well as objects from the Maritime collection. The real challenge in terms of the map was to curate the content. There was no way everything could fit on there, and in fact there was a bigger responsibility to create something that represented the research but remained accessible and engaging. The map tries to show a range of content over various districts of the city centre, and drawing upon and balancing the input of each of our participants, from sailors to engineers, office workers to market traders. The result is a map that is not comprehensive but does give an interesting and fair insight into the people, connections and spaces that made up L1 in the post-war period.

As each pin is accessed, it brings up a menu of content associated with that place, such as video interviews and archive images. Individually the contributions are very interesting, but collectively they become incredibly rich, revelaing connections between industries and people. Supported by the archive film and other media the map becomes very layered, combining personal testimony with historical documents.

The videos themselves also reveal the methodology – as people discuss their experiences, we also see them mark they key places on a map. Their navigation of the map is at times as important as the pins they place on it. This way of collecting information with a map is useful for a couple of reasons:

You can see the final map at the Mapping Memory project website:

Whilst the online map had a responsibility to represent a wide range of voices and experiences, the 40 minute documentary allowed us to tease out a few strands from the research, and produce something with a bit more creative freedom. The film was just as much concerned with looking at the waterfront as it is now, than representing spaces as they were. It also focused on the unique personalities and interests of the contributors as they explored the modern day Liverpool through the lens of the 50’s 60’s and 70’s.

The film benefitted from being informed by a years worth of interviews and research, and so we were pretty sure to begin with who we wanted to film, the specific places we wanted to explore, and the memories we wanted to share. The people and experiences in the documentary overlap, as if these people have unknowingly brushed shoulders for decades. Stories compliment each other or create serendipitous connections across space and time.

The power of the film isn’t just from the information or the connections drawn between places, but from the emotional honesty and creativity of the people in the film. Myself and Tim had already worked with them as part of the consultations, and this developed a good foundation for us to go further and be a bit more creative in their expression – in the case of Phil this manifested with him role-playing his experience of being a business commuter on the Mersey Ferry – right down to the bowler hat!. Taking people back into a space also really helped them communicate their experiences, stimulating their memories, and their accounts more vivid and spontaneous.

The production also luckily coincided with the reinstallation of the Sailors Home gates on Paradise St, and the Seaman’s Remembrance Day, which feature in the film and help to give it a resonant modern day context. The final scene of flags being rolled up symbolizes this idea that the shipping industry as experienced by the seamen in the film is now long gone.

Finally, we made some lovely discoveries about how some of the participants have been creatively exploring the city for years in their own way, such as John’s kite photography, and Angus’s film-making. We tried to include these methods explicitly where possible, giving a sense of continuity with our own practice today.

You can see the whole film below, or on the Mapping Memory website