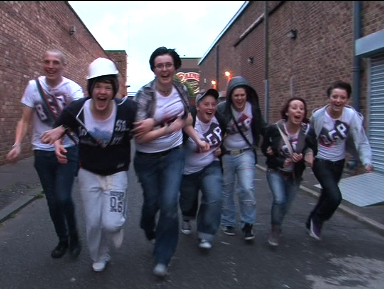 Synopsis – background longer explanation of the project – when it happened, where, how,

evaluation reports
In September 2009, 12 young Lesbian, Gay, Bisexual & Transgender people from Merseyside took part in a five-day cultural exchange trip to Auschwitz and Warsaw working with a group of young Polish LGB & T people from the Campaign Against Homophobia (KPH).

The exchange provided the group with an appreciation of the Holocaust and fate of many LGB & T people and the impact on European and LGB & T social history as well as challenging past and present issues around hate crime.

The young people took part in making a short 30-minute film documenting their experiences and thoughts around the themes of the project, along with ideas and aspirations for the future.

The resulting film has been developed into an educational resource pack for schools and colleges, enabling teachers to tackle homophobia and all forms of hate crime in schools. The pack has been endorsed by NUT, Sir Ian Mc Kellern and Chief Constable of Merseyside Police.

Since returning the group have provided hate crime workshops for teachers, pupils, youth workers, young people, housing associations and other employers. In the summer of 2010 they produced their own film “Sex Drags and Rock n Roll” documenting their efforts to raise awareness of homophobia and hate crime and promote equality and diversity. Directed by 19 year old Jess Wignall, the film has been chosen for the 2010 BFI London Lesbian and Gay Film Festival.

In February 2011 the group returned to Warsaw for four days to attend the “Equal Right to Love festival” organised by the Campaign against Homophobia’s youth group.