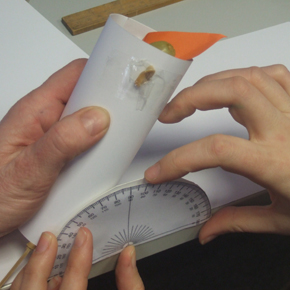 In the last week before Christmas John, Sophie Bower and I, delivered a new course in Hume Manchester called ‘Read, Write, Re-imagine’ . The course focused on developing the facilitation skills of creative new media practitioners, so that they would be able to deliver top quality creative new media activities in Schools across the North West.

The course commissioned by Curious Minds, brought together a mixture of classic connection making exercises, introductions to young people friendly software, and live ‘mini’ projects for which the participants developed their own activities to test run on one  another.

One great example of the kinds of curriculum splicing activities invented by participants was “Go Ballistic with Pythagoras Theorum” which used the theme of the Second World War, and in particular the trajectory of mortars, to explore Pythagoras. If you were to take part in this activity you would create a simple mortar, using cardboard and elastic bands, and then use Pythagorus Theorum to predict where your ammo would hit the wall – Genius!

Just briefly here are a few of my favorites of the ideas that came out of the rest of the course.

– Encourage young people to develop speaking and listening skills by filming interviews with one another.
– Link young peoples interest in War and artillery with trigonometry.
– Use computer game planning documents as a format to explore creative writing.
– Use tools like SketchUp & Scratch as a tool for young people to visualize and pitch their ideas to the rest of their class.
– Use the behind the scenes debate with which the Wikipedia community decides on what is and isn’t of publishable quality, as a way to bring debates about different readings of history to life.

I could go on but I am running out of space….

What felt like the biggest jump in my learning was the way we recruited the group.

We were asked to gather together an eclectic group of people who worked in creative new media, but not in schools. This was tricky, as the people we were looking for were not part of the existing Curious Minds promotional networks.

We decided to apply a scattergun approach, advertising the course across as many networks as possible with flyers that pointed back to a Ning site, which we kept as open as possible up until the day before the course.

In the build up to the course we were able to set up a dialogue amongst this impromptu community. People could find out more what the course was about, tell us a bit more about themselves, from that point the people who were going to get the most out of the course effectively selected themselves.If we had recruited in a more conventional way, I don’t think we would been able to bring together such an interesting group of musicians, inventors, film-makers, software developers, artists, designers and educators.

I think this method of recruitment has great potential for future projects, as it could prove a great way to contact and bring together eclectic groups of people based on their interests, rather than them being lumped into one demographic or another.