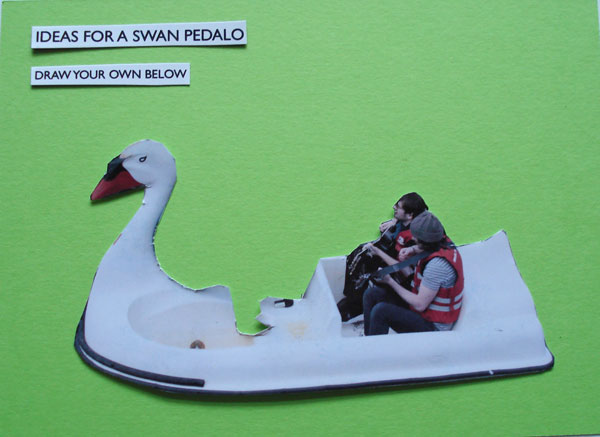 Synopsis – In November 2010, John O’Shea proposed that we buy a Swan Pedalo from Liverpool Biennial. This wasn’t just any Swan Pedalo, but one of three purchased by the Biennial for an event in Bootle, North Liverpool on the Leeds-Liverpol canal. Having been in storage since the event, they were now to be auctioned on eBay. The idea of Swan Pedalos on the canal had first been suggested to  us by a Bootle resident as part of our research for Canal & project. The “tunnel of love” had been made manifest for a single day by the biennial, before the logistics of managing them vessels had proved too difficult. Saddened at the thought that these birds were now to be sold to the highest bidder and subsequently lost to the people of Liverpool, John persuaded the Biennial to sell us one bird for the princely sum of £100. We now had to find a home for a bird as big as a car. And so the project began.

If a community of artists can not sustain a Swan Pedalo, then we have no hope.

Inspired partly by John Nash’s wooden boulder, the Swan Pedalo is a slow burning project, only moving when a proposal is both inspiring and sustainable, or when a threat to the welfare of the pedalo presents itself. It invites people to propose innovative projects, and also requires exceptionally generous and logistically rigorous collaboration from various parties. She brings people together.

Since her liberation in November 2010, Grace has been involved in a number of creative (and epic) endeavours, including projection mapping, operatic performance, aquatic driving tests, a pirate radio station, and even a 127 mile journey from Liverpool to Leeds (raising £50,000 for Sport Relief)