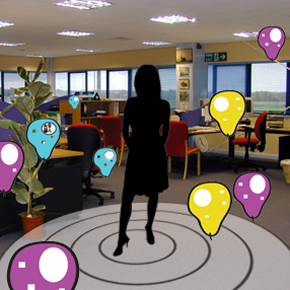 I am working with a group of young people at Weatherhead high school, on a project exploring what our thoughts might look like, if we could see them all around us.

This week has been a good opportunity to revisit the Balloonascope, which is a 3D graphing tool made up of Balloons, weights and pulleys.

We used it to model the emotional and psychological space of a set of fictional characters created by the group.

The young people added to the Balloonascope in between scenes of a drama created by the young people. The drama consisted of three scenes and explored a classroom conflict between a Teacher and three other pupils.

At the end of each scene the rest of the group were asked to write what they thought one of the characters might be thinking, feeling or remembering, on one of the balloons and place it in the classroom according to these rules.

The nearer the thought balloon is to the character that is thinking it, the more intensely it is felt.

The highlight of the session for me was when the one of the girls placed a thought balloon by the character Charlie, who in the play had been refusing to speak in class.The balloon was very close to the girl who was playing Charlie, and very low down.

The girl placing the thought balloon described the feelings it represented.

“Charlie was quiet, because she was remembering at home when her parents kept telling her to be quiet”