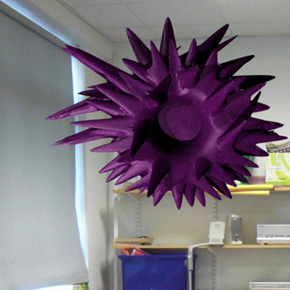 I am working with a group of young people at Weatherhead high school, on a project exploring what our thoughts might look like if we could see them all around us.

Blender is a brilliant open source 3D content authoring software and can be used to model, and render in 3D as well as making animations and computer games. It has one of the best educational frameworks I have seen for any open source software.

That said, it is a b*st*rd to get your head around at first. It has an interface not unlike a medium sized aircraft. Luckily it does have the function to create custom workspaces, so you can pretty much create your own interface.

So I set up a custom workspace, which reduced the Blender interface to do pretty much what Autodesk MudBox does, which is allow people to mould shapes as if they were made of putty instead of a mass of geometry.

The young people were faced with a 3D space, with just a sphere in the middle, and shown how to explore the sculpt tool.

People often exaggerate about this generation of ‘Digital Natives’,  but I was really amazed by how quickly the girls got to grips with this Blender workspace.To the left is an example of an excited idea, created by one of the group.  Here are some links to the resources developed for the session.