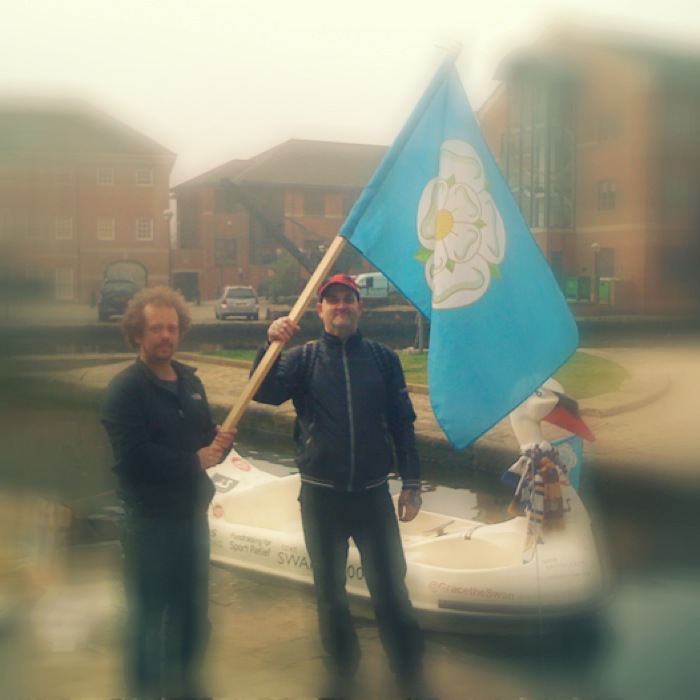 On March 18th, Grace completed an extraordinary feat, pedalling the 127 miles of the Leeds – Liverpool canal. It was a massive achievement for Grace, and of course for the BBC Radio Leeds team who seconded her on this crazy mission, and between them they raised over £50k for Sport Relief.

The project was remarkable in other ways too though…

Firstly, it realised a blue-sky idea that had come up in early discussions around the Swan Pedalo. Whilst none of the swandeliers ourselves were able to pedal her 127 miles, many of us supported the project with hands on deck for maintenance, launching, retrieval and documentation. It was hard work, but it means the level of ambition is kept high.

Secondly, her journey from Liverpool to Leeds symbolically galvanised the link between the two groups of swandeliers that have formed around Grace. Though she may have been raised in Liverpool, she is just as at home in Leeds now.  We have truly gone Trans-pennine!

What next then? Well, we’re going to meet half way, in Manchester. We are big fans of MADLAB and AND festival, and are beginning a Small Cinema project in Moston, It seems timely that we now bring Grace into the midst of all this. We want to start a Manchester Society of Swandeliers.

So, if you live in Manchester, like geeting involved in creative shenanigans, or just want to ride a swan pedalo, come along to Manchester Meetup.