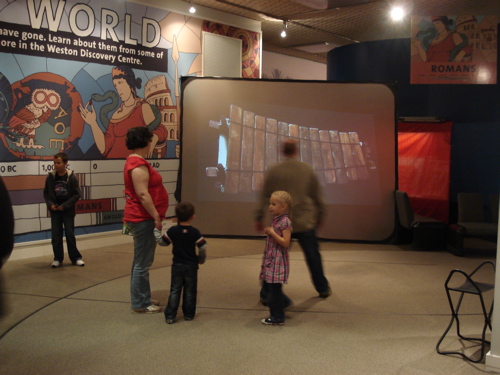 A couple of weeks ago I took part in DIY Music Day at the World Museum, Liverpool. The event was organised by Ross Dalziel of Sound Network, as part of a series of events called  How Why DIY? which aimed to open up technology to a wider audience.

This event explored ways in which people could engage with sound, from making their own thumb pianos from simple materials, to more complex (but still available) technologies such Arduino, as well as performances and sound interventions from a.p.A.T.t  and Noise Club.

I was asked to make an interactive video instrument using one of the pieces from the museums collection. This was building one previous interactive instruments I had built for other projects, but the great thing about this brief was that the percussion instrument I was using – a balafon – would not usually be accessible by the museum goers to play with.

Firstly I filmed the balafon at the museum, and then I built the interface using Isadora, which allowed me to use a camera to track visitors position in the space, and subsequently trigger video clips of corresponding notes being played. Its a simple process of isolating areas of movement on screen, and calibrating the sensitivity of the triggers, but essentially provides you with an instrument you can play with your body in space.

The Interactive Balafon went down really well on the day, and I think a lot of its success was down the the fact it only really did the one thing. It played a note if you moved, and that was all. But it did this in a very clear way that people quickly understood and could play with.

It also benefitted from scale – the size of the projection (10 foot wide) and the emphasis on lower body movement as a trigger,  meant that the piece encouraged movement through the space, and left room for collaboration, both of which were intriguing for spectators.

Read more about the piece here.